Teacher in Cambridge, George Mallory was one of the most experienced mountaineer to attemp Everest ascent. He participate to two english expeditions in 1921 (discovering the tibetan side of Everest) and in 1922 where he reached a height of 27 000 feet (about 8 000 meters), the highest altitude in the world. In 1924, considered as one of the best englsh mountaineer, the British Alpine Club called him to be second in command of its eight-man team to conquest the highest summit in the world.

He told a friend "This is going to be more like war than mountaineering".

He famously told an american reporter, to the question “Why do you want to climb Mount Everest ?” : “Because it is there”. This answer is one of the most famous sentence in mountaineering story. 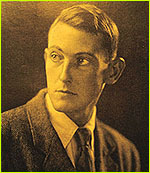 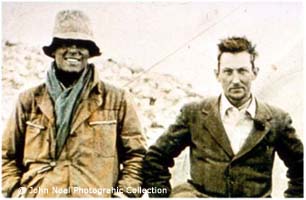 His choosen companion, Irvine, was only 22, a novice climber but exceptionally strong and fit. He was also an expert with the new technologies of bottled oxygen. His knowledge was essential during ascent in case of trouble on this equipment.

On the morning of june 8, 1924, Mallory and Irvine leaved camp at 8 000 meters where they have spent the night alone.

Shortly before 1 p.m, another member of their expedition, Noël Odell spotted from far below two distant figures climbing a rocky ledge. Mallory and Irvine were nowhere to be seen. . 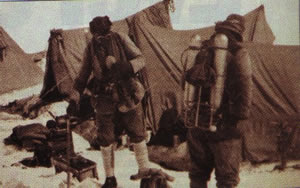 9 years later, an english expedition recovered at 27,750 feet, below the First Step, an ice axe, believed to be Irvine's (the axe was etched with tree marks as was customary for Sandy Irvine).

In 1975, a Chinese climber spotted an “old English dead“ near Camp VI. On this informations, an international expedition was created and discovered Mallory's body (later identified by his clothes and DNA analysis) on may 1, 1999.

Mallory's body was left on Everest. That is a tradition among climbers that is the product of necessity : it is very difficult to recover bodies from the mountain because of ice. He is among the first of 142 bodies currently residing on Mount Everest.

The question to know if Irvine and Mallory die on the descent and was the first Everest's summiters, 29 years before Hillary and Tenzing, has no answer and become an intriguing mystery.

The only proof : Mallory's camera and film (including pictures of the summit) has never been recovered...

The excellent book on Mallory and 1999 expedition